This search form uses an instant search feature. As you type, search results will appear automatically below the search field. When you've entered you desired search terms use tab to navigate through the available results and hit enter to open the selected page or document.
Harris honored by ASBA with Platinum and Service awards
Sean Ruggles
Friday, December 19, 2014 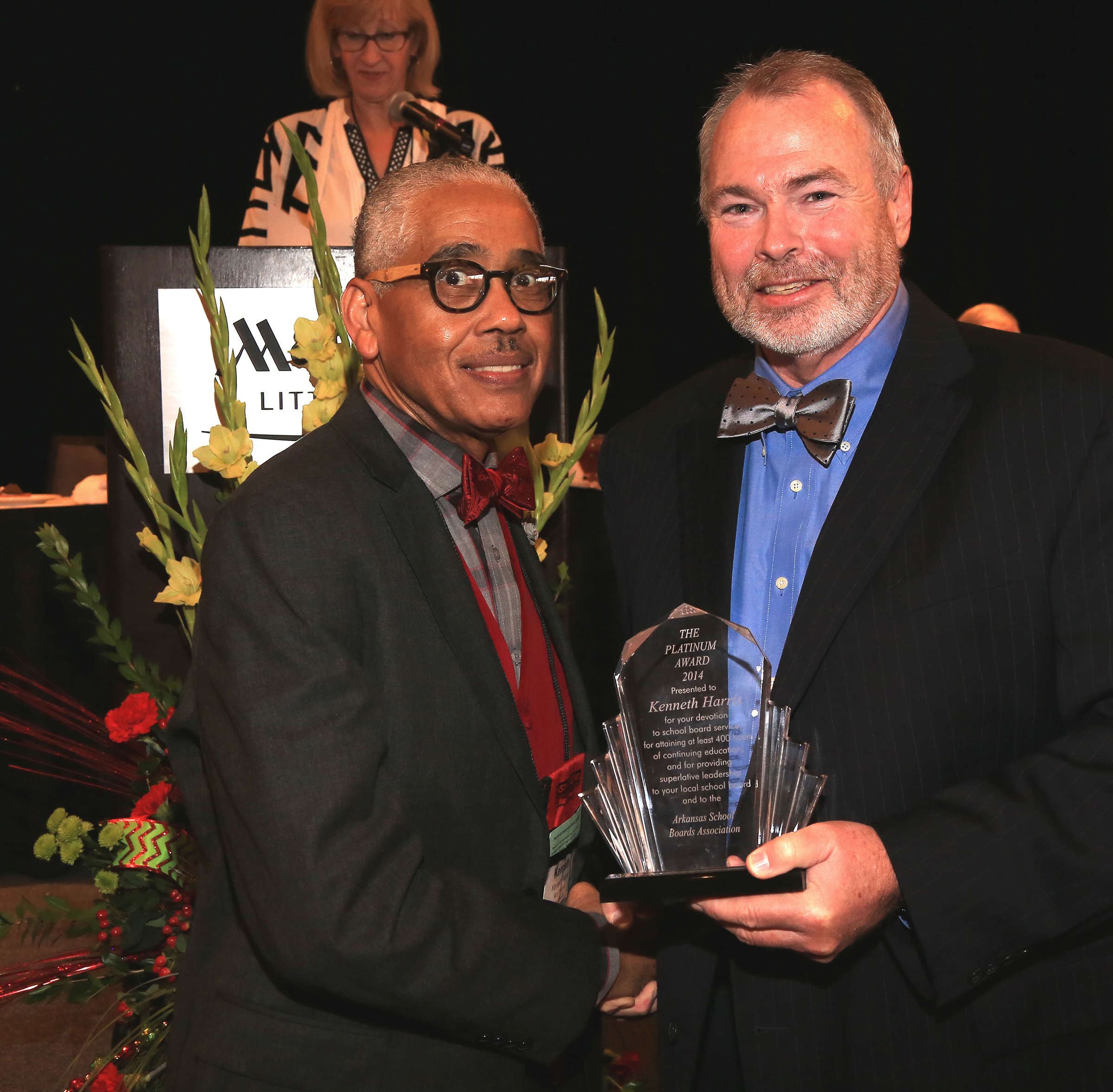 “Service is the rent we pay for the time we have been allowed to live on this Earth,” Dr. Kenneth Harris, Vice President of the Arkadelphia Public Schools Board of Education, said while discussing the importance of volunteering in his community.

What has he learned from 32 years of service as an APS board member?

“I’ve realized that if people in their communities aren’t willing to give up their time and energy, and what they may have to offer, then that community will miss out on a lot. And I’ve learned that there are intrinsic rewards from serving,” Harris said.

In addition to the intrinsic satisfaction he’s experienced so far during his time on APS’s board, Harris was recently recognized by the Arkansas School Board Association with two awards, both of which the ASBA awarded for the first time in its history.

At the ASBA’s annual conference, Harris received the Platinum Award for having completed 400 hours of professional development, and the Service Award, which is given after 30 or more years of board membership.

Harris, who has served as a school board member as long as anyone in Arkansas, is part of a group of eight who have received every award the ASBA offers.

An education career, and his child being in the public school system, led Harris to become interested in running for a board position. When the only minority representation on the board announced that he was not seeking reelection, Harris knew that the time was right.

“I’m an advocate of diversity,” Harris said. “And I knew my experience as an educator could allow me to make a contribution to the community as a whole.”

As early in his life as Harris can recall, he was encouraged by his family to pursue education, not only as a student but as a professional career as well. His parents sent three of their children at once to college on an extremely limited income. His father, a disabled veteran, put his children’s futures ahead of everything else. The support continued throughout his life.

During his later childhood years, Harris moved in with his grandmother who had suffered a stroke.

“She had no career, was illiterate, had no formal education,” Harris said. “I took care of her during that time. She would remind me everyday after returning home from school … she would tell me ‘you can’t do nothin’ without an education,’ and she provided what encouragement and any support she could to help me stay dedicated to my studies.”

Later in his life, Harris said his aunt also made an impression on him with her generosity. Only after observing his dedication to becoming educated, she provided some financial help from what little she was able to save from her $8 per week income. 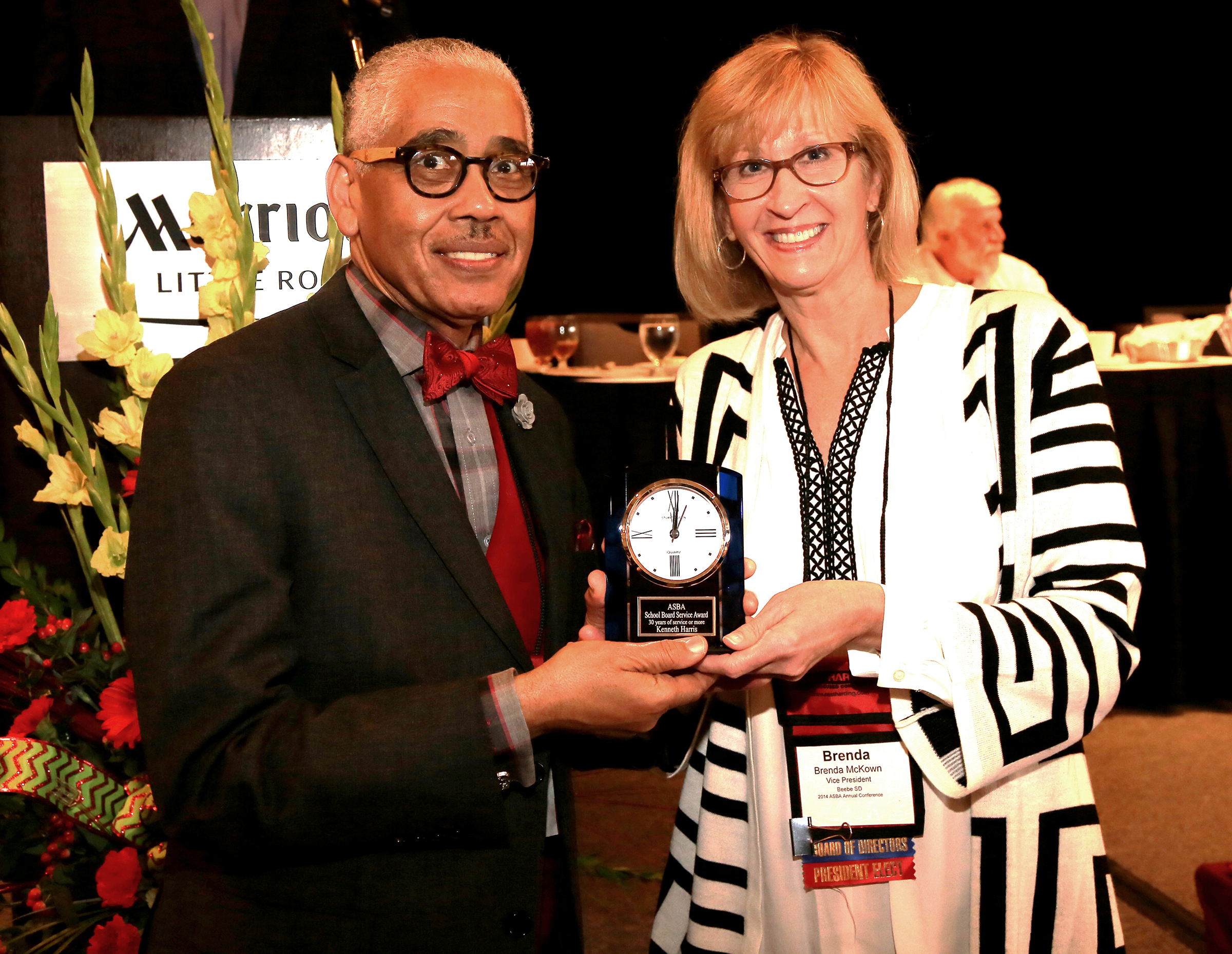 Harris began his career in his hometown of Fordyce as an elementary teacher, but has also taught as far away as Las Vegas. He worked in the Hot Springs School District, and upon completion of his master’s degree, he was offered a teaching position at HSU, where he continued until his retirement. His service to Arkadelphia, a community he genuinely cherishes, continues through involvement in numerous organizations as well as the school board.

“I prize the fact that we have a community that values, appreciates, and supports a strong public education system,” Harris said. “Even though I know that there will always be opportunities for improvement, I know we can always depend on our community to rise to the occasion. We can proceed with hard work and confidence to resolve whatever we need to, and that we’re looking out for the greater good.”

Harris likely sees some of himself and the struggles he and his family overcame in every one of Arkadelphia High School’s graduates. He said he was overwhelmed by emotion during the first graduation ceremony where parents were allowed to participate.

“Watching these parents hug their kid’s necks, and place medallions, which signified their academic accomplishments, over their heads, it moved me,” Harris said. “The first time we did a graduation ceremony like that, I could barely sit through it without having to get up and leave because I was crying. It was heart warming for me to see.”

Arkadelphia’s public schools and community have undoubtedly benefitted from Harris’s leadership, experience, and vision. He’s played a significant role in accomplishments in the District such as the passing of a mileage that allowed AHS’s campus to be remodeled, completion of the Peake Rosenwald project, extending the District’s structure to include an early childhood program, and countless others.

“Knowing you’ve been part of helping engineer the resources, and doing whatever we have to do to provide for others,” Harris said, “it invigorates my spirit of service.”