We get closer to the end of the fall season and welcome our first winter sport as October turns into November (now if the weather will just act that way, too!)

THE 9th GRADE BADGER FOOTBALL TEAM has a big end to the 2016 season this Thursday night as Arkadelphia hosts Nashville on AllCare Field at Badger Stadium. The 8th grade game will be at 5:30, followed by the 9th grade game which will be for the 4A-7 Jr. High District Championship. Both the Badgers and Scrappers are undefeated on the season and both stand at 5-0 in the 4A-7.

These two teams met in the same week 10 matchup with the same records and same championship at stake. Nashville came away with a win and extended its win streak that carried over to this season and currently stands at 55.

Kickoff is scheduled for 7:00 or around 20 minutes after the conclusion of the 8th grade game. Admission is $5.

THE BADGER FOOTBALL TEAM PLAYS TO EXTEND ITS SEASON to the playoffs this Friday at Malvern. The Badgers need a win by at least six points over the Leopards combined with a Fountain Lake loss to Ashdown to be the fifth seed from the 4A-7 in the 4A State Playoffs.

That scenario would put Arkadelphia, Malvern and Fountain Lake in a three-way tie for 5th place. With the teams all having 1-1 records agains the other two teams, the teams would go to the tiebreaker points to eliminate one team. If Arkadelphia beats Malvern by 6 points or more it would put the Badgers ahead of Fountain Lake with its 19 or more tiebreak points to the Cobras' 18.

After FL is eliminated due to points, the tie between the two remaining teams goes back to head-to-head results. The Badgers would have that tiebreak over the Leopards with the win and therefore would earn the 5th seed from the 4A-7.

Confused? Yeah, it can get that way when there are three-way ties. Just pull for the Badgers to defeat the Leopards by 6 or more and then we'll check on the Ashdown/Fountain Lake game. First thing's first, and that is that the Badgers have to win at Malvern this Friday by at least six points.

THE LADY BADGER VARSITY BASKETBALL TEAM will open the 2016-17 season with a AAA Benefit scrimmage game this Saturday as they will welcome Rison and Harrisburg for a 5:30 tip. The scrimmage will features three halves, allowing all three teams to play the equivalent of a full game. Admission to the AAA scrimmage will be $4 for everybody and because it's an AAA benefit scrimmage, APSD passes cannot be accepted. 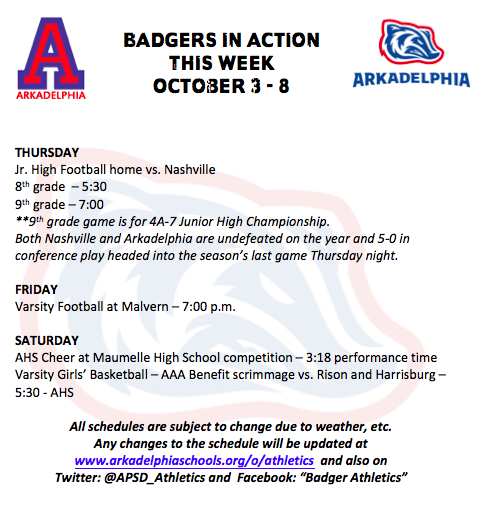