This search form uses an instant search feature. As you type, search results will appear automatically below the search field. When you've entered you desired search terms use tab to navigate through the available results and hit enter to open the selected page or document.
AHS DECA Students Hear From Pro Sports Executives
APSD Communications
Thursday, December 20, 2018

Arkadelphia High School DECA students recently had a chance to extend their learning to a location outside the classroom by participating in the Memphis Grizzlies’ Pro Sports Career Day at the FedEx Forum.

The 24 AHS students involved in DECA who went on the trip put to action the mission of the national student-led organization which is to “prepare emerging leaders and entrepreneurs for careers in marketing, finance, hospitality and management in high schools and college around the globe.”

After money through this fundraiser and others the group conducts was raised to cover membership dues, students are able to use money for various projects and trips, including this trip to Memphis.

Along with over 1,000 students from high schools in Arkansas, Mississippi, Alabama, Kentucky and Tenneseee, the AHS DECA students from a panel of executives in five of the professional sports organizations in Memphis. 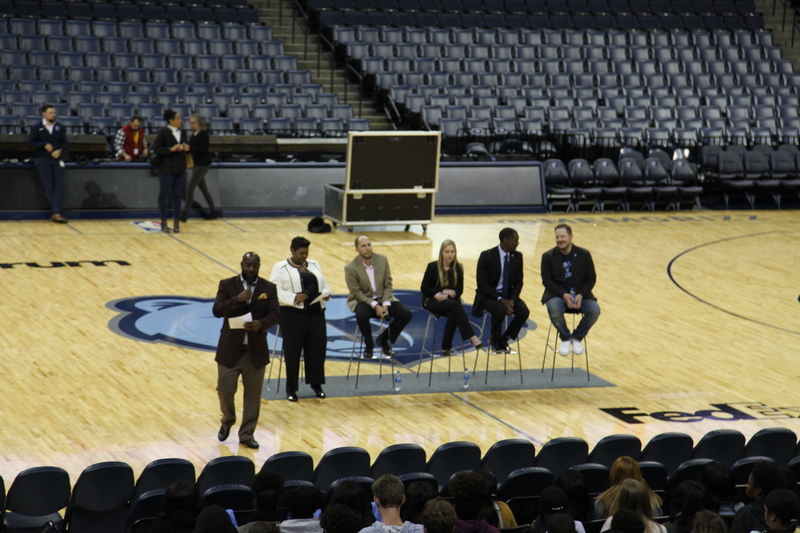 The panel took about an hour to talk to the students before entertaining a question and answer session. The panel took turns explaining their career paths, talked about experiences in high school or college that most prepared them for where they are today, talked about some of the biggest challenges in their current situation, addressed some of the thing they “wish they would have known” when they were in high school, and touched on some of the most inspirational people in their lives.

Foos explained that her work as a graduate assistant in the athletic department at Arkansas State prepared her because she did a wide variety of tasks across many different areas. “I think going to a smaller school helped me because I was able to wear a lot of hats.”

Lamprecht took advantage of growing up in New York City to work an internship at ESPN Radio in the Big Apple, allowing him to meet sports personalities across the spectrum.

Gustaveson was pleased with the panel and thought it provided some great advice and tips for the students in attendance.

“The panel did a really good job of giving some practical advice for these students as they begin to look at what they might want to do with their futures,” said Gustaveson. “I’m glad that our students who went on this trip were able to hear some tips from successful executives and hear from them their career paths and that you’re not always going to have that job that you might want, but you need to do the job you have well in order to get to that point.”

Irby put a twist on the common feeling of students not knowing what they want to do when they get to college, saying that he though it might have helped him with his career path.

“ I think not knowing what I wanted to do allowed me to try different things, said Irby, whose professional career included a job with the WWE. “I went in with my eyes wide open and it kept me from having tunnel vision.”

Whitaker, who later delved into the rising popularity of the gaming industry,  gave the students what he thought about what would be coming soon for them in the college years.

“I would urge you to use college as a time to not necessarily just how to learn to do something, but rather as a time to learn how to think about the things about which you’re learning,” said Whitaker. “Learning how to think is important.”

One poignant moment in the panel came during the question and answer session when the panel addressed the process of rejection. All of the panelists had been told no and explained to the students that without a doubt they would be told “No” at some point as well, but that rejection shouldn’t cause them to stop their pursuit of anything.

Whitaker had a personal example of overcoming rejection, explaining his internship search while a college student.

“My freshman year in college, I applied for 100 newspaper jobs – two in each state,” began Whitaker. “I got back 92 rejection letters. Reject rejection. Build resolve. Determine now what you’re going to do when you get rejected. Keep on keeping on. If you get told ‘No’, respond with ‘So?

“Even if you don’t hit your first, second, fourth or 24thtarget,” said Whitaker. “There is something for you.”

After the panel, the group ate in downtown Memphis before returning to the FedEx Forum to take in an NBA game between the Grizzlies and the Denver Nuggets. 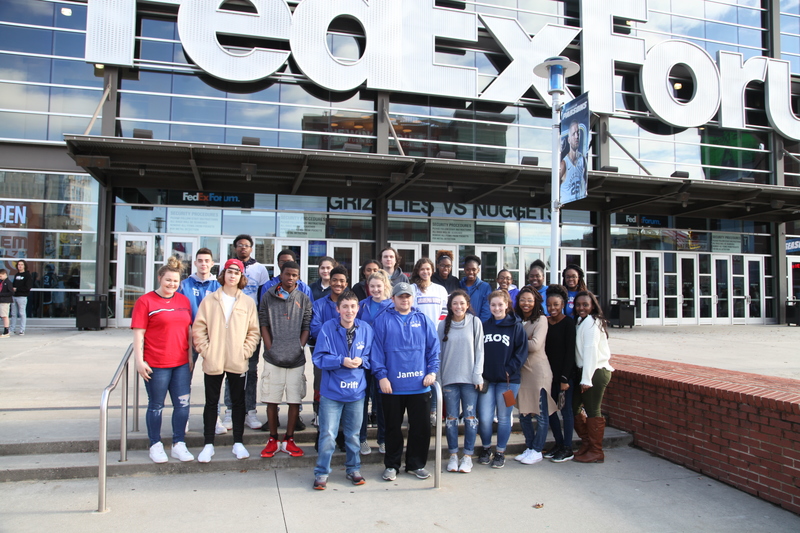 “It was a successful trip for the students and I hope they were able to take something from the panel that will stick with them,” said Gustaveson. “We’re grateful that we were able to take our students to Memphis for this event and look forward to doing other things to help our students complement their learning that takes place in the classroom with experiences such as this.”