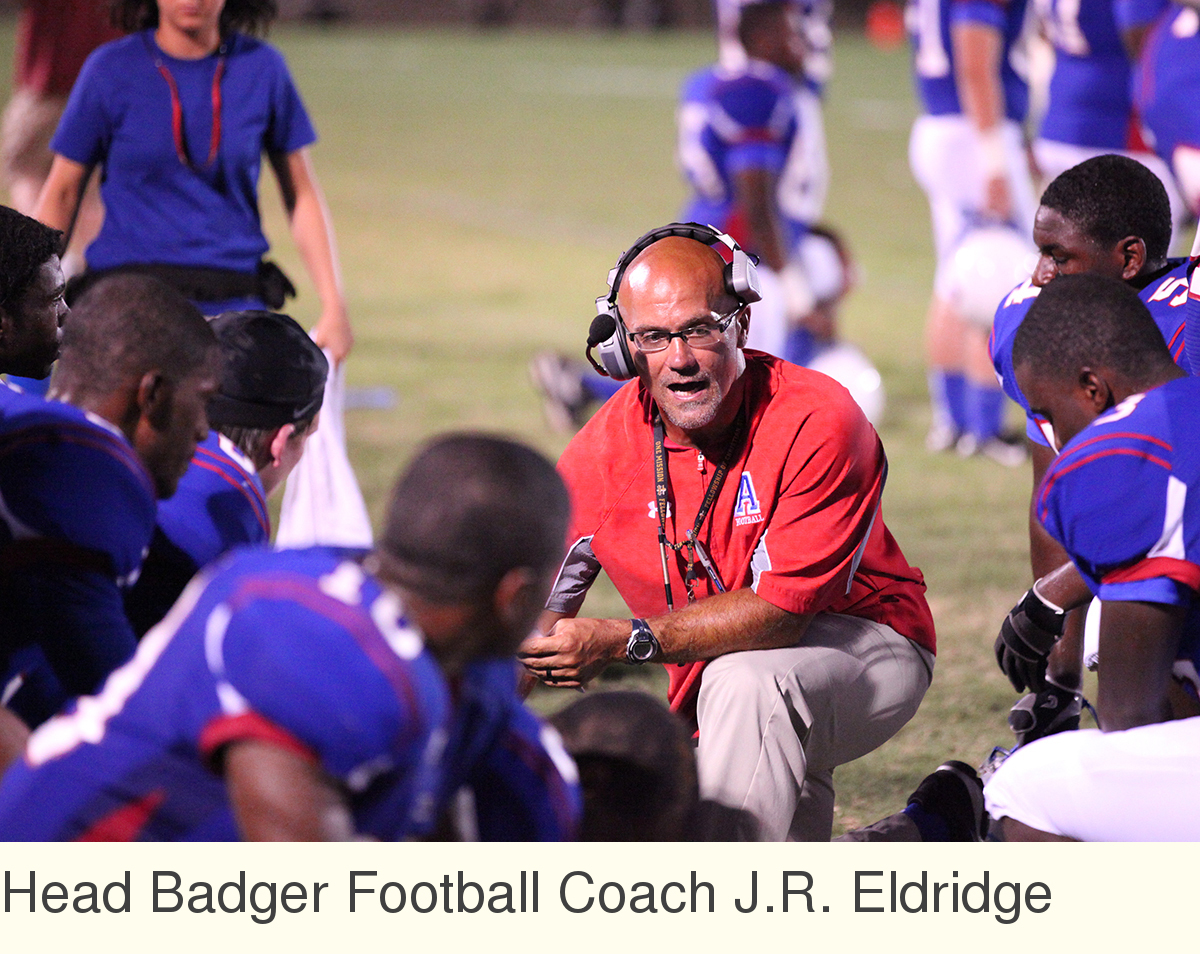 The 2012 Badger football team capped their 9-2 season with a 7-4A Conference title and Head Coach J.R. Eldridge, in only his second season as a head high school football coach, earned the recognition of Conference Coach of the Year.

“I think the 2012 season is one of those that people will be talking about for years to come,” Athletics Director Chris Babb said. “Coach Eldridge and his staff really got the team to buy into a mentality of fulfilling your responsibility, no matter what role you had on the team. It was really neat to see the town follow suit as the season went on. From to great opening night at War Memorial, to the great support at Nashville, Ashdown and Malvern, it was great to see the community come together and get behind the Badgers this season. The seniors on this team will always be able to say that they were a part of a conference championship team that won 9 games in a season. There aren't a lot of teams that do that. There is a great tradition in Arkadelphia dating back to the 70s and through the 80s and we believe that the 2012 season could play a big role in re-establishing that winning tradition. Coach Eldridge, his staff and the players are to be commended for their success this season and we look forward to a bright future.”

It is undeniable that Badger football is on the rise and that community support is at a level unrivaled in recent years. Much of the success, and much of the recent buzz about the program, stems from a central theme of Badger football. A mark of any effective leader is the ability to champion a philosophy that the group’s members will take to heart. Behind every successful business, campaign or team is a message that not only guides their day-to-day decisions and actions, but also creates an overall identity: “Forward.” “Real change.” “Just do it.”

Eldridge is writing his own page in the book of effective slogans: “VVR.” Initially, the acronym was a message used internally with coaches and players, but the slogan went viral after Eldridge delivered a charge to Arkadelphia High School at this year’s homecoming pep rally, where he encouraged everyone present to know their role and pursue their goals with “VVR.”

Vicious. Violent. Relentless. According to Eldridge, these are the words that drive not only the Badger football program, but also the daily lives of anyone who buys into the philosophy.

Vicious. Violent. Relentless. According to Eldridge, these are the words that drive not only the Badger football program, but also the daily lives of anyone who buys into the philosophy. The slogan caught on and before long was on posters, windows of local businesses, and was being chanted from the stands at games. It is even being used as a Twitter hashtag.

“VVR is about attacking your responsibilities ... This philosophy applies just as much to my players getting their homework done for class as it does them fulfilling their duties on the field.”

“VVR is about attacking your responsibilities,” Eldridge said. “It doesn’t matter if you are a football player, band member, science teacher or engineer, we all have a job to do. Even the spectators in the stands at a game have a responsibility of showing enthusiastic support and encouragement. This philosophy applies just as much to my players getting their homework done for class as it does them fulfilling their duties on the field.”

Football is a physical, contact sport. The design of the game mimics warfare and is built largely upon opponents striking each other with their bodies hundreds of times a game. And with that said, the VVR philosophy can be easily misunderstood, but Eldridge offered a denotative explanation for the slogan and encouraged everyone to put it to use in their daily lives.

“Football is 48 minutes of legal fighting,” Eldridge said. “There are rules that must be followed and finding success is about finding a balance. VVR is not playing dirty. VVR is enveloped by the rules of the game. If it were a dirty mentality, then it would be counterproductive.”

“Vicious leads because it describes our intent and execution,” Eldridge said. “By definition, vicious is being deliberately violent. We are deliberate in what we do. Our actions are not accidental. We prepare and practice to avoid carelessness.”

“Violent,” Eldridge continued, “is, by definition, the excessive use of force. The connotations of violent are of committing crimes, but again, VVR is not dirty, and when we are on the field between whistles, we will apply excessive force. That is how you out-play and out-execute your opponent. We rarely out-size or out-athlete our opponents. We succeed by out-playing and out-executing.”

Eldridge added that scripture includes instructions for followers who wish to take hold of the Kingdom of Heaven to do so violently. Eldridge insists that the negative connotations of the word ‘violent’ must be put aside to fully appreciate the message.

“This is about pursuing a goal with all the strength and force you contain,” Eldridge added. “It is interesting to note that our opponents have been penalized more often than us after the whistles with personal foul and unsportsmanlike conduct penalties.”

The last sentence of the Arkadelphia Football creed states, “It is our goal to be the most violent and classiest team in the state.”

“We are not promoting lawlessness,” Eldridge said. “It’s actually the exact opposite.”

‘Relentless’ describes the Badger’s determination, especially in the wake of a tough end to the 2012 season. The VVR message will carry the team through the offseason as they prepare for next year.

“Relentless doesn’t rest,” Eldridge said. “Relentless is unceasing and doesn’t get complacent. This is how we pursue our goals. It is how we will continue to pursue a state championship and how we will go about continuing to improve this program so that it produces quality young men.”

“Pursuit of VVR is intangible. We can’t touch that. This far exceeds a tangible goal such a conference or state championship. Those are things we can attain, we can hold that trophy, we can touch it. VVR comes down to how we are living our lives."

Furthermore, Eldridge pointed out that the “Pursuit of VVR is intangible. We can’t touch that,” he said. “This far exceeds a tangible goal such a conference or state championship. Those are things we can attain, we can hold that trophy, we can touch it. VVR comes down to how we are living our lives. Every year we will continue to apply this philosophy to our lives and will, number one, be better people, and number two, win at whatever we are doing.”

In just two seasons as a head high school coach, Eldridge and his staff are doing things with the Badger football program that haven’t happened in years. Seven of the last nine seasons ended with a sub-.500 record; however, in 2012 the Badgers earned their first Conference Championship in over 15 years and finished with a 9-2 record. The community took note their success after the Badgers defeated Benton in the Kickoff Classic at War Memorial Stadium in the season opener and support continued to grow.

“To me, the community buying into our message is awesome,” Eldridge said. “The community being involved now is a testament to how much our players believe in this philosophy. The message has led to success. It’s led us to a conference championship. It is leading us to great accomplishments. But what is even more awesome is seeing our kids grow up to become responsible, effective, productive individuals in all that they pursue. We are doing more than coaching a successful football team, we are preparing students for life.

“I am so thankful for this opportunity. I am thankful for this coaching staff and thankful for the players and community buying in to the program. There are so many factors that go into success in a single football season. You can’t boil it down to one element or one coach. I’m just thankful to be part of it.”