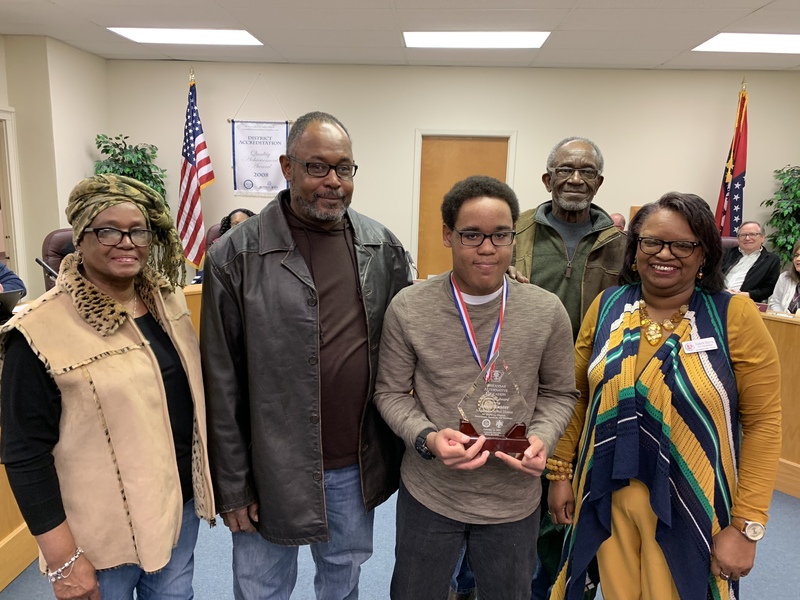 Arkadelphia High School’s Jaylen Hunter was recently recognized by the APSD Board of Education for being named a Diamond Award recipient by the Arkansas Association of Alternative Educators (AAAE).

Students are nominated for the Diamond Award by their teachers and administrators for displaying diligence, perseverance, sensitivity and resiliency. The selection committee is comprised of AAAE board members and members of the Arkansas Department of Education Alternative Education unit.

Arkadelphia Alternative Classroom Environment (AACE) Coordinator Judith Davis nominated Hunter for the awards and spoke about Hunter and the Diamond Award during the board meeting.

“Jaylen has been in our program for three years and it was about six months into our program that Jaylen realized the opportunities available and the support he had of the staff,” said Davis. “He really began to excel. By the time he was in his second year he was ahead of the class. He was developing friendships, working on class projects, participating in class discussions, sharing oral reports, helping others among many other things. His grades have skyrocketed and he now has A’s and B’s.

According to the nomination form sent to the AAAE, it was the AACE staff becoming his family that helped spark his change. “He had found people that genuinely care about him and want the best for him.”

Hunter is on track to graduate from AHS. He plans to attend college and is interested in engineering.